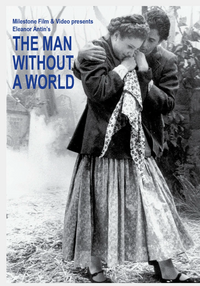 Sneak Preview: Man Without a World Cine-Concert with Donald Sosin and Alicia Svigals

In a lengthy preamble, THE MAN WITHOUT A WORLD is credited to the legendary (and imaginary) 1920s Soviet director Yevgeny Antinov. But the film is anything but old. In fact, Antinov is the creation of contemporary filmmaker Eleanor Antin, who made the film in 1991 as an homage to the silent era and a love letter to her mother, a former actress in the Yiddish theater of Poland. In a Polish shtetl at the turn of the 20th century, the villagers struggle with both the antisemitism of the wider world and political infighting within their own community. Against this backdrop, two star-crossed lovers — merchant's daughter Rukheleh (Christine Berry) and impoverished Yiddish poet Zevi (Pier Marton) — seek happiness. But many obstacles come between them, including Rukheleh's disapproving parents, Zevi's dalliance with a seductive gypsy dancer (Antin) and the sufferings of Zevi's younger sister, Sooreleh (Anna Henriques), traumatized by a sexual assault in her youth and now subjected to exorcism rituals by local religious zealots. DIR/SCR/PROD Eleanor Antin. U.S., 1992, b&w, 98 min. Silent with English intertitles. NOT RATED