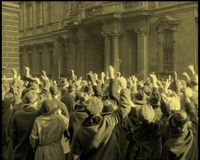 City Without Jews Cine-Concert with Donald Sosin and Alicia Svigals

1924's THE CITY WITHOUT JEWS was based on the 1922 satirical novel by Hugo Bettauer, a prolific Austrian writer and journalist who was murdered by a Nazi party member in 1925. Although set in a city called Utopia in the near future, the story clearly concerns 1920s Austrian society's antisemitism and the threat of growing extremism. After the National Assembly passes a law expelling all Jews from the country, the majority nativist population celebrates, but then panics over the resulting economic and cultural decline caused by the Jewish population's sudden absence. Directed by H. K. Breslauer in a daringly Expressionistic style, the film combines a darkly comedic tone with an unnervingly prescient depiction of how an imagined mass deportation might be carried out. Long thought lost, with only a badly damaged, incomplete copy surviving, a complete version of the film was discovered at a Paris flea market in 2015, and has now been digitally restored by the Austrian Film Archive. DIR/SCR/PROD H. K. Breslauer; SCR Ida Jenbach, from the novel by Hugo Bettauer. Austria, 1924, b&w, 80 min. Silent with English intertitles. NOT RATED